Storm Alieen was barreling into the UK and the Bay of Biscay between Spain and France was feeling it’s effects. Waking after a delayed start from Portsmouth and a rather bumpy night through the English Channel the group of intrepid whale watchers from the marine charity ORCA were out on deck at first light, albeit rather murky and damp, first light. The ship was just  coming round the top of France near to Ouessant Island. A spot we do not normally see at this stage of the trip. Morning dawned and even in the relative shelter of the coast the waters of the Bay were tumultuous. The low lying cloud and rain did nothing to dispel the rather murky mood. Still we were here and while the conditions were challenging we were in good whale and dolphin habitat. As the ship sailed through the rain, away from the French coast, and out into the Bay the wind and waves picked up. The dark grey sea swirled, dipping and rising in large waves whose foaming white tops raced down the back of the waves. The unrelenting wind whipped up the water from the tops of the waves sending large sheets of spray up to meet the low misty clouds. The ship pitched up and down, rolling with the waves and swell. Crashing onto waves huge walls of white spray shot into the air, was caught by the wind and sent careening down then outside of the ship. Standing near a railing the wind pummeled you. The gusts almost feeling like punches. The whale watchers sought shelter on the outside decks, with most heading to the back of one of the lower decks where more shelter was provided by the main bulk of the ship. The conditions were tough for watching. Even the most experienced whale watcher getting caught out by a wave or the wind catching the spray and whipping it up to look like a blow from a whale.

But their perseverance and determination was rewarded. Not necessarily by the tonnes of cetacean sightings the Bay is often known for, but there was wildlife to be seen and in the stormy conditions it was all the more spectacular. Shearwaters starting out on their migrations rode the waves like pro-surfers. Manx, Balearic, Cory’s, Great and numerous Sooty’s piling past the ship, skimming into troughs of waves and then shooting up and over the tops with a entourage of silver spray. Gannets powered through the wind; dark youngsters, perhaps experiencing their first ever storm, and brilliant white adults with yellow heads and black wing tips, who have seen it all before.

A sunfish, held more to the mercy of the waves, floats past the ship. A white dinner plate in a dark grey sea. And there were dolphins. With the conditions as they were, they would just suddenly appear out of the waves and white water alongside the ship. One minute nothing but waves and spray the next dark bodies with a flash of yellow would appear. Once, twice maybe three times with a flourish in the wake and then disappear into the swirling maelstrom.

As the day progressed it brightened and the sun pushed away the rain clouds adding glinting highlights to the white tops of the waves and deepening the ocean from a dreary grey to a deep blue. Towards the southern part of the Bay the wind began to drop and while the swell remained heavy there were fewer white caps and less spray. But where were the whales? It was prime habitat; the under water sea mount and canyons of the southern Bay of Biscay. The whale watchers had moved to the optimal viewing deck of deck 10 with its extra height and while the wind still tugged at you it was certainly much better.  The air of anticipation and tension was building… The afternoon progressed. A shout for a Cuvier’s beaked whale went up from the other side of the ship. Gone before most could turn their heads. The sun was heading for a horizon now clear of clouds and casting warm evening light over the rolling waves. It was getting late in the day. And then, making many people jump out of their seats or start from their snoozing, a shout, ‘blow’! The word comes out like the release of a held breathe, an explosion of air, sound and relief. Clearly, out to the starboard side and a little behind the ship comes the tall columnar spout of water as a large whale breaks the surface to breath. It is likely from a fin whale although since no body or fin was observed it cannot be confirmed. What it definitely was a rorqual whale. Not only that there was two of them. A collective sigh of relief goes through the whale watchers. We stayed on deck watching the sun dip in an orange blaze.

The late arrival in Santander meant a late departure. Which meant after an even lumpier night we woke still in the deep waters of the Bay approaching the northern slope and still in prime whale habitat. However the strong winds were unyielding, the swell remained heavy and going into it meant the boat was really rolling and bouncing around. Lifting up and slamming down on big waves sending huge showers of salty spray down the sides of the ship. The top deck was definitely out of bounds so the whale watchers again gathered on the rear of deck 6. But it was not a complete right off.  Dolphins periodically appeared like magic, surfing down waves alongside and in the churning wake of the ship. A couple of whales even appeared close by although you had to be on the right side of the ship to catch a glimpse.

But this day, perhaps the first time for me, birds stole the show.  For a blubber lover like me that does not happen too often. But skimming over the large rolling waves, among the glittering spray that was whipped and flung into the air by that infallible wind, for a good 10 to 15 minutes a flock of Great Shearwaters danced with the storm and showed us what the freedom of flight is really like. It was truly magic to watch. 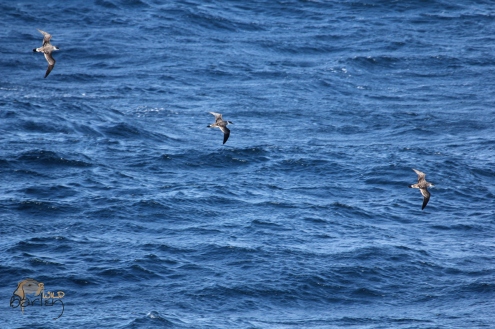 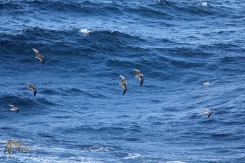 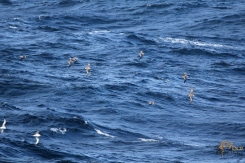 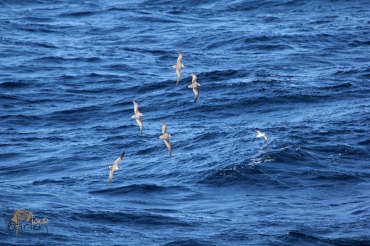 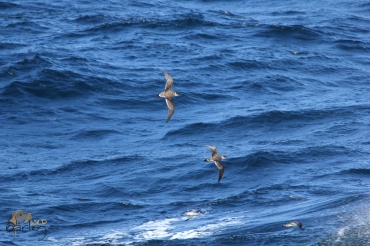 And so the day drew on and we headed into the shallower waters of the English Channel, heading back towards the coast of France and then on to Plymouth. Still keeping our eyes open, still watching those waves, dodging the spray and enjoying the wild side of the ocean. It may not have been the classic, cetacean-fest of a trip we all may have hoped for but it certainly was a ‘wild’ trip.

My deepest thanks goes to the other ORCA guides onboard, and the charity itself for all the work they do and for giving me the opportunity to share some of my knowledge and experiences!