On November the 5th and 6th 2011, I volunteered for WhaleFest, Europe’s first ever Whale Festival. Over 2,500 people came to Brighton over the two days to take part in the event; with 60 exhibitors from charities to tour operators, talks from experts and wildlife celebrities and workshops from underwater acoustics to whale origami. In the ‘great hall’ people could wonder amongst life sized whales, watch amazing footage on a huge screen, explore the belly of a sperm whale, learn how to rescue a stranded pilot whale and even go on a whale watch!

For my part I was involved with this last activity, taking people on a virtual whale watch with real boats, real life jackets, real water and real footage of blue whales and various dolphins off the coast of Sri Lanka! (well why not eh!).

It was a fantastic event, a real uplifting experience to mingle with so many people all passionate about whales and dolphins and too pass that on to all those people.

Fortunately the festival was not a one off and WhaleFest 2012 has been confirmed! In the 30th anniversary year of the International Whaling Commission’s adoption of the moratorium on commercial whaling, WhaleFest is returning to the place where this historic decision took place, the Brighton Hilton Metropole.

This weekend, returning and new volunteers met up in order to celebrate the success of WhaleFest 2011 and to chat, and get excited about, WhaleFest 2012. Led by Planet Whale founders and WhaleFest organisers extraordinaire, Dylan Walker and Ian Rowlands, the weekend gave many volunteers the chance to experience one of the big successes of the 2011 event, the film Keiko The Untold Story.

The film tells the story of the killer whale Keiko, the star of the film Free Willy, from being rescued from the isolation of a tiny, concrete pool in Mexico to a purpose built, state of the art enclosure in Oregon and finally to the ocean waters of Iceland, and home. Although many would say the end of that tale is sad, with Keiko dieing from pneumonia in Norway, I found the whole tale inspiring and moving. Although never completely ‘wild’, for five years Keiko was a free whale, free to move around as he pleased and free to interact with wild killer whales. Watching a whale that had been so lethargic and ill in Mexico surfacing amongst wild Orca in Iceland was truly amazing. 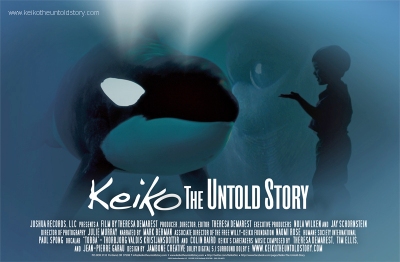 And so as the sun set over Upminster in Essex, exciting plans were being made, plans to inspire more people about these amazing animals and to make WhaleFest 2012 the biggest and best event of its kind in world.

For more information on WhaleFest and Planet Whale visit the website